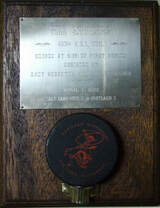 The brass plaque on the front of the trophy is inscribed as follows:
Bill Saunders
400th W.H.L. Goal
Scored at 8:35 of First Period
Assisted by
Andy Hebenton and Guyle Fielder
April 1, 1972
Salt Lake City 2 at Portland 3

​
If you want to know more about Bill Saunders and his career in the Western Hockey League, please go to Bill Saunders Biography where you can see a photo of him, a short biography and his entire career statistics. 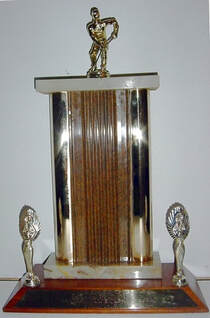 Fred J Hume Trophy Presented to Gordon Fashoway
Fred J. Hume Trophy (WHL Most Gentlemanly Player), 1960-61 Season, Presented To Gordon Fashoway
​
This trophy is the Western Hockey Leagues Fred J. Hume Trophy, which was presented to Gordon Fashoway for the 1960-61 season. In 1960-61, the first season the Portland Buckaroos existed, Gordon Fashoway was their captain and was also the leading goal scorer on the Buckaroo team. During the season "Fash", as his team mates called him, provided the leadership, grit and goal scoring they needed in order to win the championship. Fashoway scored 42 goals while only spending eight minutes in the penalty box. This ability to score goals and provide leadership while racking up very few penalty minutes is what earned him the Fred J. Hume trophy.

The Fred J. Hume trophy was awarded to the Western Hockey Leagues most "gentlemanly" player. The trophy is named after Fred J Hume who was inducted into the Hockey Hall of Fame as a builder in 1962. His love of sports led him to help found the Western Hockey League as owner of the New Westminster Royals hockey club. He operated the team for nine years with Ken MacKenzie but never won a championship. Hume finally sold his players to Portland and folded his franchise when mounting costs made pro hockey in a smaller community like New Westminster an unrealistic venture. Hume always believed that the Vancouver area could support large scale sporting events. His involvement and lobbying grew when he gained a stronger voice as Vancouver mayor in 1950. Undeterred by the difficulties facing the New Westminster hockey club, Hume brought the British Empire games to Vancouver in 1954 and helped land a minor pro baseball franchise in 1955. Hume's drive and leadership won him a host of admirers throughout the West Coast. The Western Hockey League (WHL) honored his contribution by naming a trophy after him to presented annually to the league's most gentlemanly player. He was inducted into the Hockey Hall of Fame in the Builders category in 1962.

The brass plaque on the front of the trophy is inscribed as follows: